The team at DT Recumbents wish you all a Safe and Merry Christmas, and thanks you for your support over the last 12 months.

We will be having a Christmas break, so we will be closed from Christmas Eve 24th December, re-opening Monday 4th January 2021.  We will be monitoring emails, so if you have a major catastrophe, send us a message and we will see what we can do to help!

In March we saw the sale of GreenSpeed Australia to WhizWheelz USA, who packed up all the GreenSpeed stock and shipped it to America.  We went from “yes, we can have a GT20 ready to go for you next week” to “We don’t know if new GreenSpeed Trikes will be available to Australia in the foreseeable future.”

In October, Victorian company Trisled was announced as the new Australian distributor for GreenSpeed.  Trisled have been doing their best to secure an Australian share of GreenSpeed Trikes in production at the moment.

So far, we have seen a quantity of GT20’s (all sold now) and Magnum BW’s (1 left) and are expecting some GT26’s very early in the new year.  Other models including Magnums and Anura’s are anticipated around mid-year.

COVID Impact on the Cycling World

COVID has had a massive impact on the cycling world.  As our gyms and fitness classes closed under lockdown, cycling took over as a COVID-Safe form of exercise that we suddenly had the time to explore, often with our families.  The demand for all types of cycles soared, and is still high. As the cycle manufacturing world struggles to catch up with the upright (upwrong?) and growing eBike demand, the smaller Recumbent market is experiencing similar issues.

It is going to take a while for the industry to recover and catch up, so 2021 will still see lots of ups-and-downs regarding availability of bikes, trikes and components.

On a more positive note, Electric Assist kits and batteries have recovered from the COVID-induced shortage, and are more readily available. We can supply and fit your Mid Drive or Rear Wheel Hub drive.  See our E-Assist web page for more info on which type will best suit your needs, and give us a call if you have any more questions.

As well as our GreenSpeed GT26’s, we have a Performer JC-26X – Suspension trike due to arrive in early January to add to our demonstrator range.

Our demonstrator Trikes include:

Our Demonstrator Bikes include:

And of course our personal bikes are here for discussion…  Challenge Mistral, Performer 700C Highracer, and M5 Carbon High Racer. 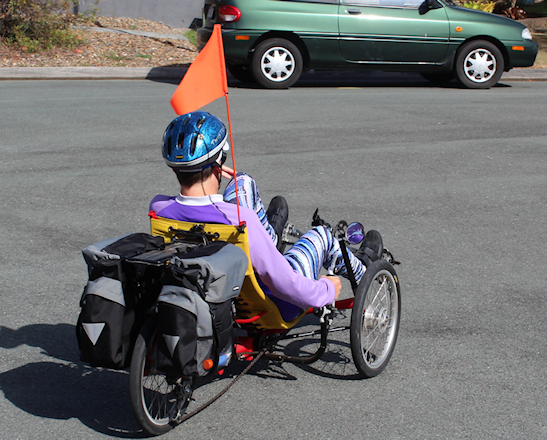 Welcome to our blog!

In this we hope to encourage some discussion, thoughts, provide a little technical information, and of course let you know what we are doing.

Our (my?) journey into recumbents started 10 years ago – although it really began 25 years ago when I saw an advertisement for a Greenspeed trike – but that seed lay dormant until I accepted that upright bikes were getting uncomfortable.  The wonders of the internet opened my eyes to the various recumbent types, but being unable to find one locally to try I cut metal and created a bike.  Rough and ready, but hey, it worked.

A purchase of a Performer bike followed, and the relegation of the upright bike to the back shed completed the transition to a recumbent cyclist.  Cycle commuting was the next progression, together with the inevitable purchase of another ‘bent.

A change in work circumstance and DT Recumbents was born.  Dragging my better half along with me, we soon had a selection of trikes and bikes for test rides, a website, and all manner of interesting people calling in to try this alternative way of cycling.

We’ll be writing about our recumbent experiences, as riders, fixers, sellers and probably spectators, with thoughts on the bikes and technology that cross our path.  With luck someone will find it interesting and useful.